In this ever-Instagrammable age where every waking moment is a potential photo-op, the Pantone Color Institute’s fall-winter color palette is primed for individuality.

Pantone’s newest New York Fashion Week-geared list embraces identity and lends itself to experimentation. Leatrice Eiseman, executive director of the Pantone Color Institute, loves that consumers are exercising their creativity and are no longer glued to a matchy-matchy look, she said, adding, “It’s more about doing what really expresses how you feel about yourself and your clothing, and the statement that you want to make as an individual. Our mothers and grandmothers would probably cringe at some of the color combinations.”

As an increasing number of restaurants, hotels, museums, bars and other public places are splurging to create more vibrant, photo-friendly interiors, many of their patrons are also taking greater care in choosing what they wear. Modern life, however one defines it, is “absolutely like being an artist. When people say to me, ‘I’m not an artist. I don’t know that much about color,’ I say to them, ‘But you choose makeup colors all the time. You choose a nail polish color. You choose the flowers and the place mats that go on your tables when you have guests come over. That is all a form of creativity and so is putting your wardrobe together,’” Eiseman said. “That has always been my message to people — you have some of that artistic ability in you. You need to recognize that and foster it, because it can bring you a lot of joy.”

Energizing shades can be somehow rejuvenating. “That is an overall reflection of our lives today. We are super-overworked. We have had this conversation before and it hasn’t gotten any easier. Wanting that stability of those deeper colors to balance and yet the power is so obvious,” Eiseman said. “We are certainly seeing that in our government today in terms of how many women are elected into positions of power. That affects the designers as well. Why are they drawn to using these particular kinds of colors for garments? It is an overriding mind-set. There are so many colors.”

Sugar Almond, Dark Cheddar, Galaxy Blue, Bluestone, Orange Tiger and Eden round out the second half of the fall-winter list. This season’s classics are Vanilla Custard, Evening Blue, Paloma and Guacamole. As the culinary-inspired names suggest, some color trends start in the food and beverage industry, which is always one of the starting points for color forecasting. “It is so interesting how people are getting back into cooking and baking from scratch in particular. What is so appealing is the warmer, sweeter taste. That is certainly reflected in the colors we’re seeing in fashion. Even though women are thinking about more power, at the same time there is that need for nurturing and baking is a creative outlet. It’s not as though we have a lot of time to do it,” Eiseman said.

Chili Pepper
19-1557
Fall’s leading color is a spicier shade of red than Fiesta, which topped Pantone’s spring list. Sandra Oh wore a Chili Pepper Jenny Packham gown to the Golden Globes. Visitors to the Brooklyn Museum will find Chili Pepper-colored garments in the “Frida Kahlo: Appearances Can Be Deceiving” exhibition. Just as home décor has incorporated more adventurous colors, so have other industries, Eiseman said, “A large part of that is attributed to a digitalized world and all of the images that people are looking at now on Instagram — no question.”

Biking Red
19-1650
Whether cycling for transportation or recreation — indoors or out — spinning is a way of life for millions worldwide. Aside from hinting at the physicality that is ingrained in many, this deep hue is strong and powerful. Nicole Kidman got a jump on the trend by wearing a shimmery Michael Kors gown in this shade to last month’s Golden Globes. “While Chili Pepper has a warmth that casts a sense of drama and excitement that is very stimulating, Biking Red is somewhat deeper and not quite as warm,” Eiseman said.

Crème de Pêche
12-1110
Embracing, but light, this soft color — like all of the top five — is a warm one. Lady Gaga wore a Calvin Klein gown in this faintly feminine shade to the Critics’ Choice Awards. The beauty world embraced the pale peach trend as evidenced by Noomi Rapace’s peach-dyed locks and Kendall Jenner’s pale peach lips on the latest Vogue Italia cover. Marc Jacobs enlisted colorist Josh Wood to dye models’ hair peachy and other soft hues for last season’s runway show. “Both peachy tones [like Peach Pink below] throw off a healthy, rosy glow to the skin. It’s refreshing to have some relief from all the vibrancy,” Eiseman said.

Peach Pink
15-1530
Bolder than Crème de Peche, Peach Pink shares the shade of a Cipriani bellini. Kate Mara wore a bejeweled floaty gown in Peach Pink to the Golden Globes last month. Kiki Layne’s ethereal Dior Haute Couture gown for January’s Golden Globes also looks to fit the bill. “Very flattering,” this color throws off a healthy glow to the skin, Eiseman said. “Women are so mindful about hiking, biking, trekking and being physical. This color helps to bring that into mind.”

Rocky Road
19-1234
Pantone executives love a double entendre. Not only the name of a chocolate and marshmallow ice cream flavor, Rocky Road can conjure up images of trekking and hiking. It can also be associated with wealth. “Trekking and hiking are a big deal these days. Solid ground that you can walk on is something that everyone is seeking today,” Eiseman said. Alexander Wang is among the designers who doesn’t need reminding, having sent hiking boots down the runway last season.

Fruit Dove
17-1926
Millennial Pink lives on in this option for a powerful color. Pigs are trending with kids, shoppers and designers. Even Tom Ford likes Peppa Pig candy. “It’s interesting how shocking pinks have stayed on even in autumn. This is a consumer favorite and an attention getter without all of the heat that the other two reds have.”

Sugar Almond
18-1155
Like Rocky Road, this brown is a grounding color that provides a sense of stability. Described by Eiseman as “an appetizing midtone,” this sweetened shade folds into this season’s culinary-inspired choices. It’s a mood throughout fashion: Ralph Lauren has a café in his Madison Avenue women’s store. Designers and cookbook authors like Zac Posen, Phillip Lim and Lela Rose want shoppers to follow them in the kitchen, too. New England Patriots quarterback Tom Brady arrived at the Super Bowl in a Tom Ford suede coat in Sugar Almond.

Dark Cheddar
15-1150
Bold and daring, Dark Cheddar is a sharp blend of yellow and orange. The color can be found in Hermès bags — as in the paper ones used for purchases in the luxury label’s boutiques. Saks Fifth Avenue shoppers will find the vibrant color in its new main-floor redesign in the New York flagship. The shade is meant to be nurturing, however. “Even though dark cheddar is a cheese color, you could be baking something that isn’t necessarily sweet,” Eiseman said.

Galaxy Blue
19-4055
Thoughtful, evocative and representative of a greater galaxy, this color can be transporting. For a starry night at the Golden Globes, Amy Adams stepped onto the red carpet wearing a Calvin Klein by Appointment gown in Galaxy Blue. Meghan Markle is another fan of the color, as well as the one that follows, Bluestone. Pamela Rolland is in on the trend, inspired by Tiffany glass. Eiseman said, “Galaxy Blue and Bluestone are more subdued blues, sort of like browns, more grounding. Blues that are more subtle. It’s kind of the thoughtfulness that goes along with the reds.”

Bluestone
18-4217
A color of quiet resolve, Bluestone and Galaxy Blue can also work together. Eiseman said, “From a psychological standpoint, there are great counterpoints to support each other. From an aesthetic standpoint, it gives you great options to put an outfit together.”

Orange Tiger
16-1358
Relaying a fearless energy, this orange-y hue was the same shade seen in the velvet belt in the custom Vera Wang gown that Constance Wu wore to the Golden Globes. First Lady Melania Trump is a fan of the color, too, as is Foo and Foo designer Elizabeth Hilfiger, whose fall collection is proof of that. “The orange flavor is still there, but even the term ‘tiger’ accentuates the fact that there is power in that color. It’s a strong orange in addition to a strong red,” Eiseman said.

Eden
19-6050
Eden in the ideological sense is a long way off, but this deep, stately forest green is winning over naturalists and office dwellers alike. It gives the wearer “the opportunity to go to another deep tone instead of the usual navy, dark gray or even black,” Eiseman said. “Knowing we are heading in that direction was kind of a surprise.”

Vanilla Custard
12-0815
Lady Gaga helped to bring this smooth white to the forefront by wearing a Dior couture gown to the SAG Awards. While Gladys Knight’s Michael Kors dress for her Super Bowl LIII performance was not quite custard, it will inspire others to lighten up their wardrobes. Sandra Oh furthered the trend, by starting her hosting duties at the Golden Globes wearing a white gown, too.

Evening Blue
19-3815
Not quite navy, this confident deep blue is more reminiscent of the night sky than sailor stripes. Like this season’s other three Classics, this reliable shade can easily be a backdrop for any of the top 12, especially the more spirited Chili Pepper, Peach Pink, Fruit Dove, Dark Cheddar and Orange Tiger.

Paloma
16-0000
Unpretentious and understated, this elegant gray is more whispery than a stormy gray. Dakota Fanning personified all of the above by wearing a custom Armani Privé strapless gown in this soft hue to the SAG Awards. Another luxury-minded personality, Paloma Picasso, did come to mind when Pantone was naming the color. But Eiseman said, “It’s really more about Paloma being another name for dove. A softness is implied with that color. It doesn’t have any hard edges. It was related more to the bird than Paloma herself.”

Guacamole
17-0530
Blame it on by Chloé, Bluestone Lane Café, Avocaderia and all those other avocado-loving outposts, but now Guacamole green is a preferred color. Integrating Guacamole into the basics is “a complement to all of the warm colors across the color wheel that really helps to intensify them,” said Eiseman, adding that “looking at how the colors marry each other can offer interesting opportunities to accessorize with different colors.”

To view the original article by WWD, click HERE.

Sign up for our newsletter and get the latest updates, news and product offers via email 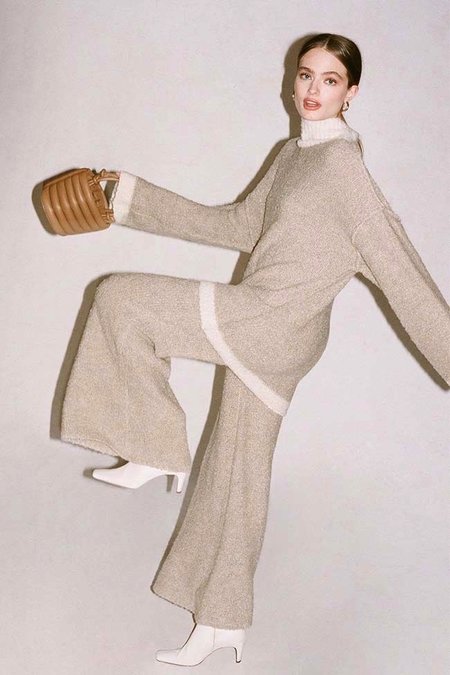 We're feeling the fall vibes #inthefold and we want to help you get ready for sweater weather! Shop The Fold's Sweater Edit below.... 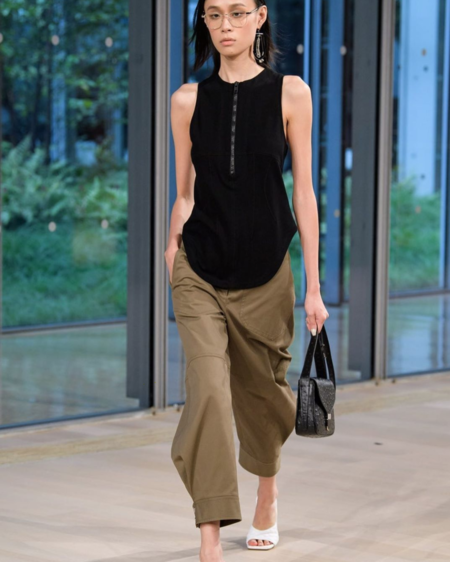 Who do you dress for? 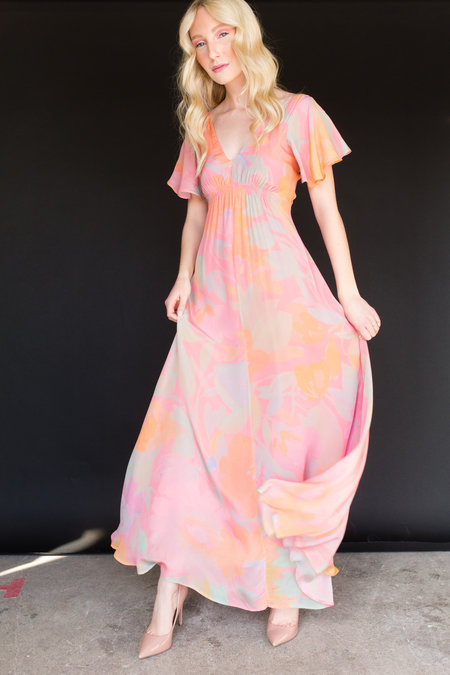 "THE SPRING 2020 STYLE REPORT: 15 TRENDS TO TRY THIS SEASON" FROM THE SCOUT GUIDE

SPRING 2020 Style Report from the Scout Guide Featuring Tips from Fold Owner, Natalie Navis....
Please accept cookies to help us improve this website Is this OK? Yes No More on cookies »